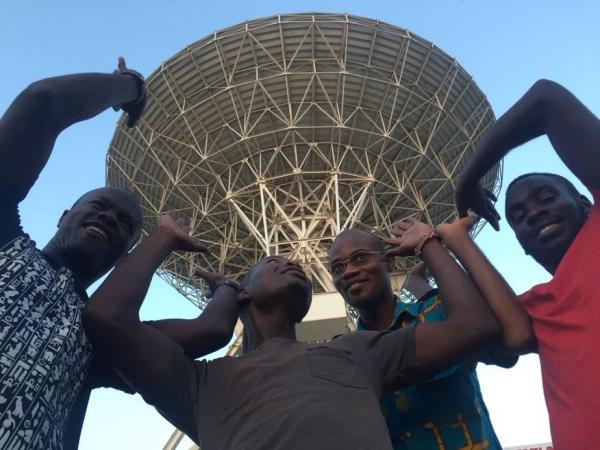 Recently there has been a spring of activity in the town of Kuntunse in Ghana. The area, known as 'satellite' by the locals, gets its nickname from the 32m radio dish that contrasts with the surrounding dusty roads, grasses and wild fruit trees. The radio dish at Kuntunse was acquired from a telecommunications company after it fell into disuse. It is now refurbished for use as a radio telescope to form part of the African VLBI Network (AVN), and occasionally joins European VLBI Network (EVN) test observations when possible. Since its inauguration, there has been continued development at the station on the premise that the increased activity shall invigorate the radio astronomy community in Africa in preparation for the Square Kilometre Array.

Such preparations extend to investing in human resources, since the SKA and its precursors will require a considerable number of astronomers and engineers, at all stages of its development and operations. In order to promote local skills - support is provided through a radio astronomy training course, organised as part of the EU H2020 JUMPING JIVE and Development in Africa with Radio Astronomy (DARA - UK) projects.

The students who attended the course, the majority of whom came from Ghana and Kenya, were at undergraduate and masters stages of university education. The group represented a broad range of backgrounds, including electrical engineering, telecommunications, mathematics, and particle physics - and while interest in astronomy was a common feature, few in the group had received a formal education in the subject.

For many of the trainees the programme was an introduction to the concepts and physical processes that produce radio emission received by telescopes like Kuntunse, as well as the programming, data processing, scheduling and coordination that are all needed to take an initial research idea to the level of an interferometric image that can be published. Lecture subjects generally followed the backbone topics of radio interferometry and VLBI, such as coordinate systems, time standards, Fourier transforms and imaging techniques. Owing to the flexible schedule, and requests from the students, the programme also made ample time for group discussions on the reality of a career in astronomy, and the ups and downs of life in research.

The three week course was jointly supervised by researchers at Manchester University and JIVE (Ross Burns and Jay Blanchard). The intensive course was exactly that; intensive. But, the enthusiasm and energy of the group and supervisors was as stable as a ytterbium lattice atomic clock. Providing more students have access to such programmes through projects such as DARA and JUMPING JIVE, we can be sure to see the continued growth of African radio astronomy in the years ahead.