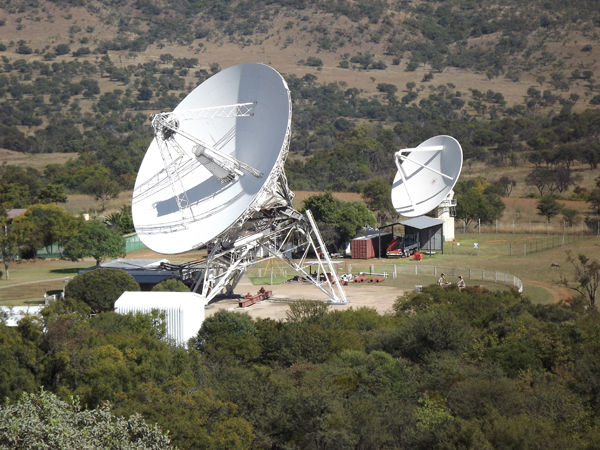 DWINGELOO, The Netherlands (11 May 2012) - The Joint Institute for VLBI in Europe (JIVE) proved again Thursday that it is not restricted by its name, as it welcomed the National Research Foundation (NRF) of South Africa as a member. JIVE's funding organisations already include the National Astronomical Observatories of China, as well as European national research councils and facilities in France, Germany, Italy, the Netherlands, Spain, Sweden and the UK.

JIVE is a scientific foundation that supports the operations of the European VLBI Network (EVN) of radio astronomy facilities. The EVN collaborates with international facilities to conduct Very Long Baseline Interferometry (VLBI), an astronomical technique that uses widely separated radio telescopes in conjunction with each other to simulate a single telescope hundreds or thousands of kilometres in diameter. This technique produces the clearest, highest resolution images of some of the most distant and energetic objects in the Universe.

NRF's Hartebeesthoek Radio Astronomy Observatory (HartRAO) has been an active member of the EVN since 2001, and its 26m dish has participated in EVN observations for an even longer time. "The formal addition of the NRF as a full JIVE member signals NRF’s commitment to VLBI and to the future of our collaboration in the EVN in particular," says JIVE Director Huib van Langevelde.

HartRAO is working with various African countries to convert obsolete satellite communications dishes across the continent into radio telescopes to create an African VLBI network, which, it is planned, will also collaborate with JIVE. South Africa is augmenting its radio astronomical capabilities with the Karoo Array Telescope (KAT-7 array and MeerKAT), which will also be used for VLBI.

"The NRF partnership commits JIVE to actively assist in making these facilities successful new additions to the VLBI network," adds Langevelde. "Hartebeesthoek's participation in VLBI observations over the past several years has improved performance of the EVN tremendously. We look forward to observing together with these new South African telescopes to further strengthen the EVN."