Astronomers peer into the lair of a mysterious cosmic radio burster 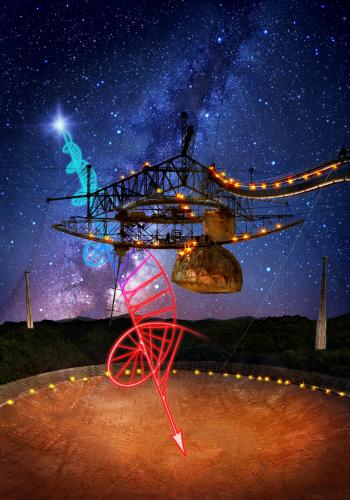 One year ago, an international team of astronomers, which included JIVE researchers, pinpointed the location of a Fast Radio Burst (FRB) for the first time. FRB 121102, as it was named, is located in a star-forming region of a dwarf galaxy at a distance of over 3 billion light years from Earth, and is the only known repeating FRB.

FRBs are visible for only a fraction of a second, which makes the repeating FRB 121102 interesting to study. Each burst is comprised of an enormous amount of energy - approximately the same amount of energy that the sun releases each day. Yet, the physical origin of these bursts remains a mystery.

To better understand this strange phenomenon, astronomers have now used two of the world's largest radio telescopes - Arecibo Observatory in Puerto Rico and Green Bank Telescope in West Virginia - to look further into the source of FRB 121102. In doing so, they found that the source of the bursts exists in an extreme and unusual environment.

The team studied the environment by looking at the behaviour of polarized radio waves at a higher radio frequency than ever before. They observed that the polarised radio waves demonstrated extreme twisting. This twisting occurs if the waves travel through a region with a magnetic field, due to an effect known as Faraday rotation: the stronger the magnetic field, the greater the twisting. The amount of twisting observed in FRB 121102's radio bursts is among the largest ever measured in a radio source, and the researchers conclude that the bursts are passing through an exceptionally strong magnetic field in a dense plasma (a hot, ionized gas).

With a number of wide-field radio telescopes now coming online, astronomers expect that more such sources will be discovered in the coming year, and they are poised to answer increasingly fundamental questions about FRBs.

The results from this study appear on the cover of the January 11th edition of Nature.

The 305-metre Arecibo telescope, in Puerto Rico, and its suspended support platform of radio receivers is shown amid a starry night. A flash from the Fast Radio Burst source FRB 121102 is seen: originating beyonf the Milky Way, fromdeep in extragalactic space. This radio burst is highly polarised, and the polarised signal gets twisted as functionof radio frequency because there is an extreme region of magnetised plasma between us and the source of the bursts.